Hunt Lake Trail is a 12.6 km (7.8 m) trail that leads north to Indian Bay returning along the east shore of West Hawk Lake. The trail used to be a loop, but now is only a return trail, meaning that you return on the same trail you went in on. Allow at least 3 hours to reach the trails end, where you will see a shelter and a picnic table beside Indian Bay (6 hours round trip). There are some steep, difficult climbs along the trail that reward you with great views. Depending on when you go, there are also plenty of mosquitos along the trail, so you will likely want some bug spray. Overnight camping is not permitted. Difficulty level is intermediate.

How to get to the Hunt Lake Trail head

Drive the the Trans Canada Highway East from Winnipeg towards Kenora. Turn off at West Hawk Lake exit, which is about 12km past the Falcon Lake exit, and about 130km from Winnipeg. Once you make the turnoff into West Hawk Lake, follow the road until you reach the stop sign. Take a right at the stop sign and head past the campground and beach which are on your left and continue up the road until you reach the dead end. There is parking to your left at the barrier and there is a sign telling you that you are at Hunt Lake Trail. You’ll walk about 5 metres through the bush on a small trail to a road, take a right at the road and walk until you see the trail heading into the bush, this is the Hunt Lake Trail head and is marked by a sign. 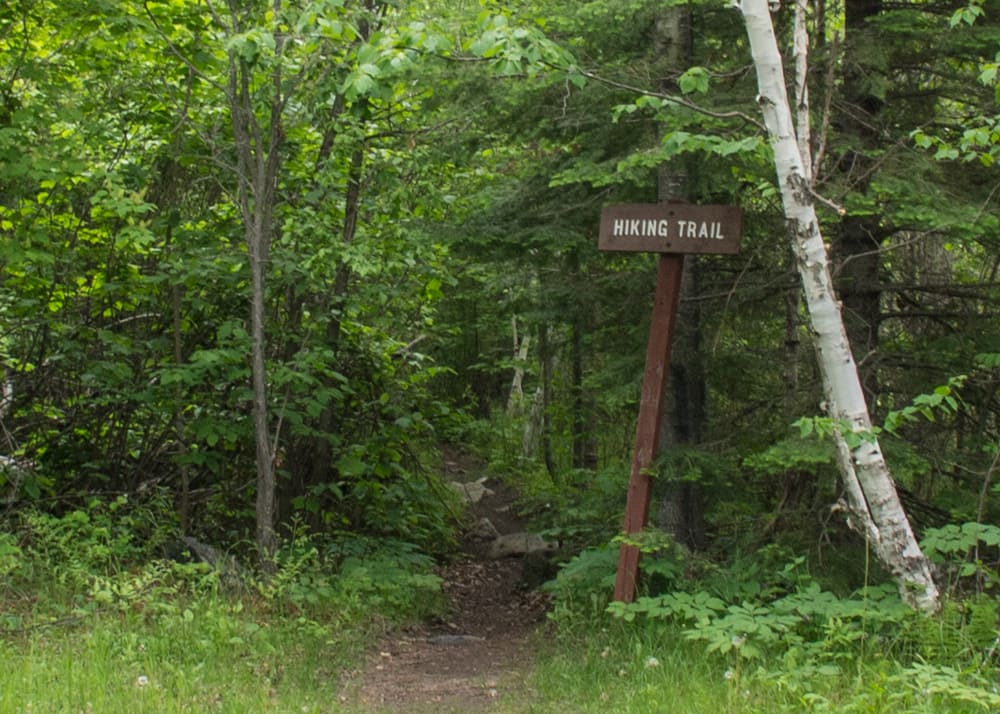 I hadn’t done much in the way of research on the Hunt Lake Trail, so I wasn’t sure what to expect. I knew it was going to be about 12km, but apart from that I wasn’t sure what the terrain was going to be like. I’d imagined it was going to be a lot like the trails in Birds Hill Park that I had hiked last year with my brother, fairly simple, easy strolling trails with maybe a section or two with a little rougher patch. Wrong. It was a lot more difficult than I expected, I guess that’s why it’s called an intermediate trail. There were a number of difficult rocky ascents and descents that would have been much more dangerous if it had been raining, fortunately it wasn’t. A lot of rocks and roots in the path itself, as well as some boggy areas that required some extra navigation.

I was trying out my new hiking shoes, the Inov-8 Terroc 330’s, and it’s a good thing too because I ended up getting a few booters in the boggy areas. But they worked as advertised and within about 10 minutes of getting soaked feet, they felt completely dry as if I hadn’t just stepped into a watery mud hole. 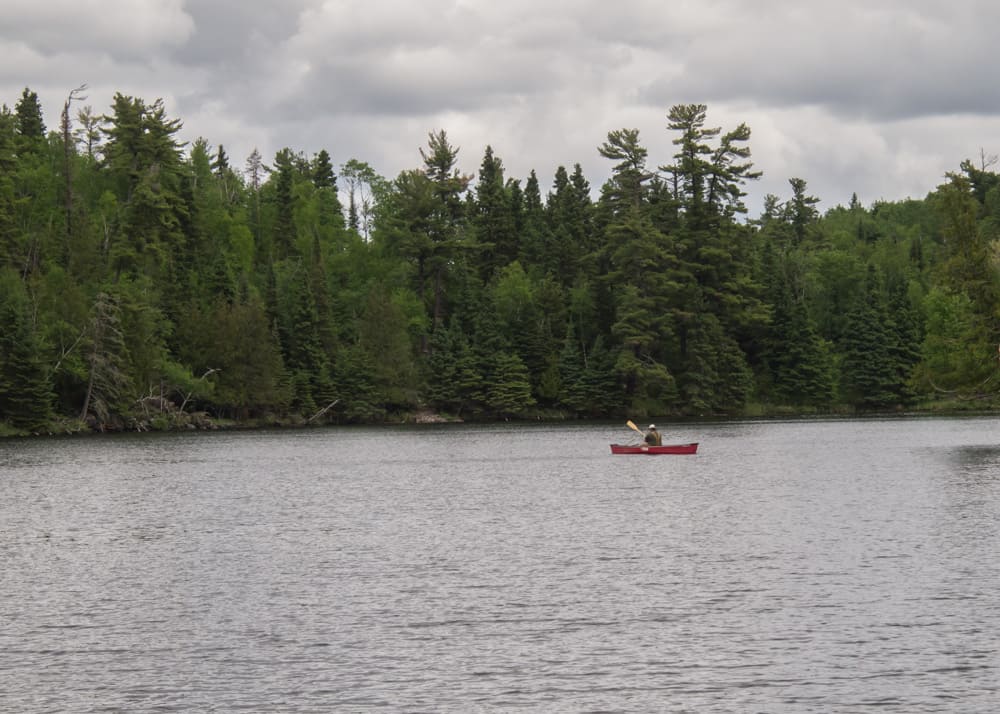 The mosquitos, oh, the mosquitos. I had figured I would be able to do the trail in about 2 hours. Once I got into the trail a couple hundred meters the mosquitos were on me. I was wearing a short sleeve shirt and some pants, and I was constantly killing the mozzies on my arms and neck as they were swarming me. Bear in mind that I don’t typically use mosquito spray as I’m not fond of the smell. So I ended up picking up the pace and hoping to get through without too many bites. This became an issue as I nearly fell off the cliff or down a rocky embankment on a few occasions due to being overly distracted by the mosquitos and tripping on the rocks and roots in the pathway. No worries I told myslef as I would soon be at the finish…then after another 20 or 30 minutes of hiking I came upon a sign indicating that I had gone 2 km of the 6.3 km to the turn around point. Well obviously this wouldn’t due, as there was no sense getting seriously injured on my first hike of the season, so I decided to dawn my rain jacket when I came upon a breezy area where the mosquitos would be less troublesome.

This seems like a breezy area, and I don’t hear or see many mosquitos. I put down my pack and dig out my jacket. Isn’t that nice, the mozzies have found me, about 30 of em all looking for blood. So I quickly get the jacket out of the bottom of the pack and throw it on. After struggling with the zipper for a bit and getting a few nice bites I’m about to take off again when I realize that I can’t actually access the camera as it’s under the jacket. So, off comes the pack, off comes the jacket, off comes the camera strap, and then jacket, camera strap, pack…nope, pack, then camera strap. Quickly, must move quickly. 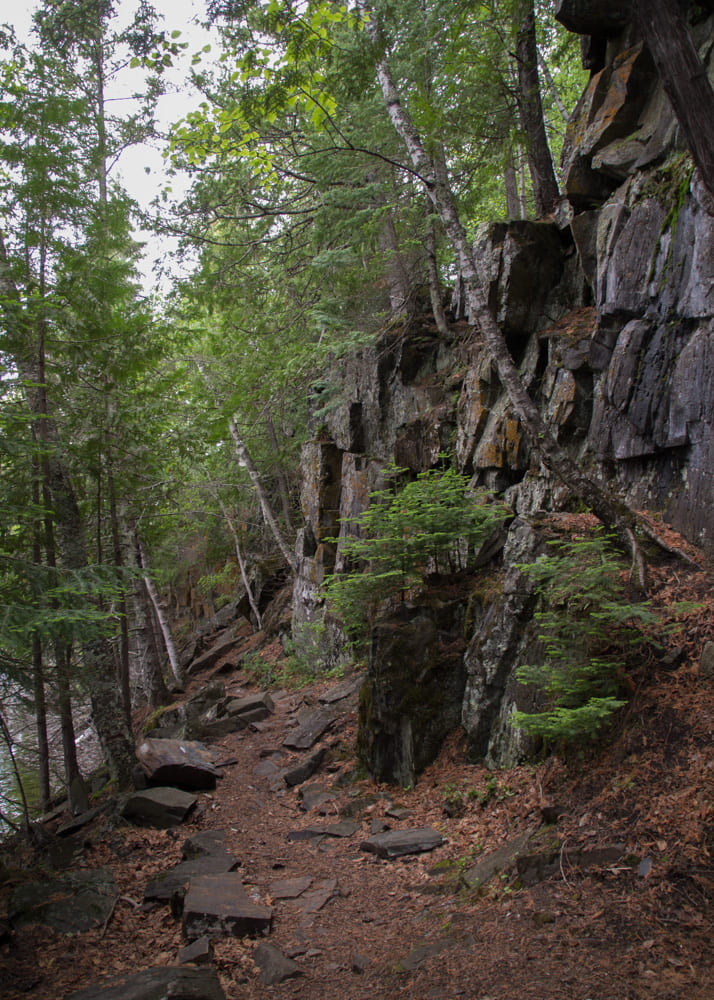 The Malpais Trinity rain jacket was actually surprisingly helpful in fending off the mosquitos, I don’t think I got a single bite on my arms or back after putting it on. I could hear the mozzies around my ears, and had to fend them off, but all around it was a great decision. I was able to focus more on the trail. And thankfully, about another km later, the mosquitos seemed to disappear altogether and the trail became easier to navigate. I figured this was due to the heat of the day, and was thankful for it, little did I know they would return when I re-entered the last 3 km on the return trip.

I brought 2 liters of water and a couple granola bars for the hike. I would say that was sufficient water wise, but I could of used another granola bar for the hike, even though I had eaten a big breakfast at the restaurant in town before heading to the trail, I still felt fairly hungry on the return trip and was nearing the bonking zone. I guess a 5 hour hike will do that to yah. 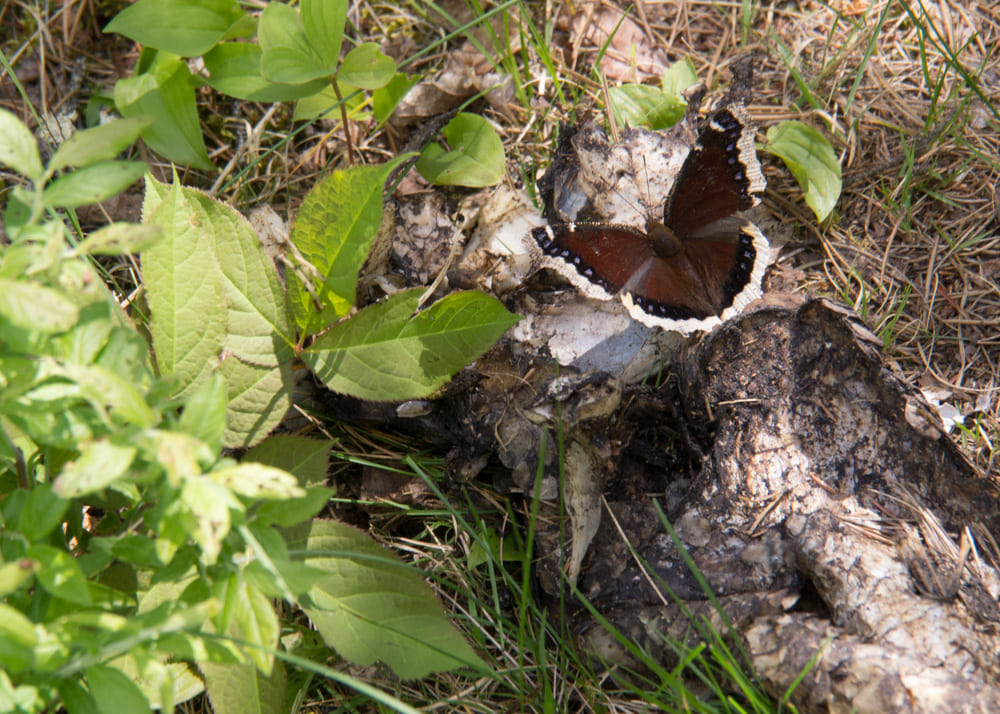 Butterfly along the trail

Perhaps due to the new shoes I was trying out, or as a result of them not being a bit looser than perhaps they should have been, or perhaps a poor choice of socks, I was getting that burning sensation on the soles of my feet as though I had some nice size blisters on them. I actually stopped about halfway back, and braved the mosquitos, which thankfully had not yet fully reappeared yet, to see if there was anything in my shoes on in my socks that was causing the burning, but nothing was readily apparent. So I replaced the socks and continued on, thinking surely I’m going to have some nice sized blisters when I reach the end.

As I mentioned I was getting fairly energy depleted near the end, and knowing that I had passed the sign indicating that I had 2km left before reaching the trail head what seemed like ages ago, I was none too pleased when I started hiking up one of the rocky cliffs thinking that there was a red ribbon on a tree above only to realize that what I thought was a red ribbon indicating the trail I was supposed to be on, was actually a dead evergreen branch that looks very similar to the red of the ribbon to tired eyes. So back down the treacherous rock cliff I went. At this point, I really wanted to rest for a bit, but I knew that would only invite the mozzies to a feast. I can’t remember a time when I had so many bites on the palms of my hands and in between my fingers, they’d gotten enough of my blood already. “Please, no more rocky cliff ascents”. Arguably, I had made the steep climbs and descents much more difficult than they needed to be by having the camera on a strap around my shoulder, which meant I could make no sudden movements to grab a rock or bush if I slipped because that would almost surely lead to a smashed lens…won’t be making that mistake again. 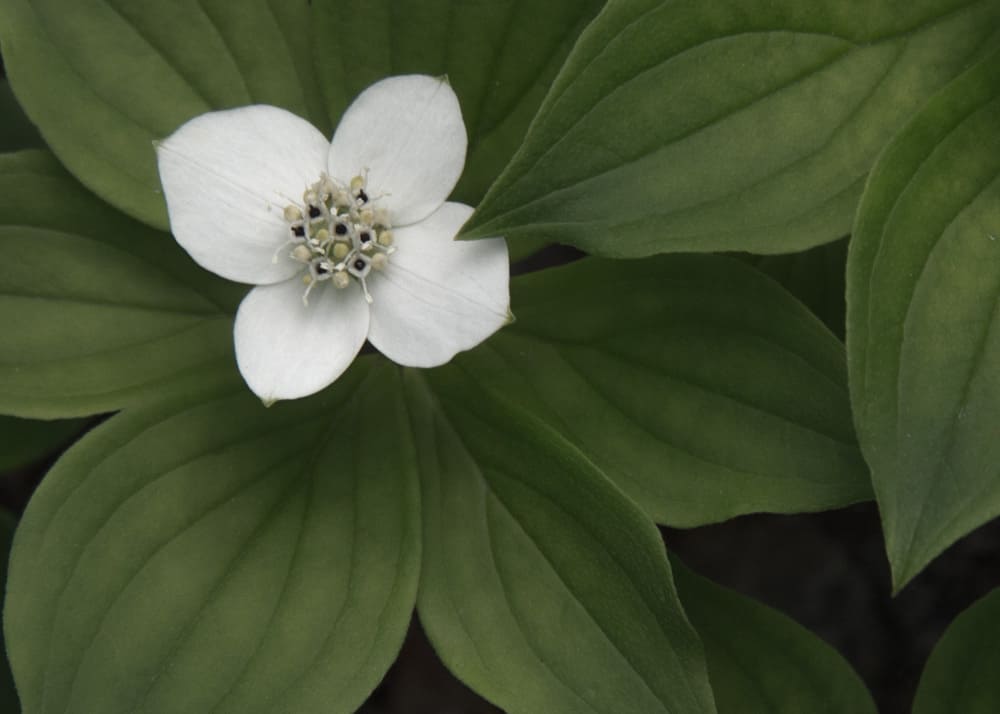 One on many flowers seen along the trail

After eating some sport jelly beans, and downing another bottle of warm water from my car at the trail head. It was back to the campground to check out the damage I did to my burning feet. Yah, there’s some smoothness on a few spot on the soles of my feet, so they might amount to something. In the end, the blisters I was concerned about never ended up forming, but I’ll be sure to wear some better socks, perhaps some merino wool socks, and to tie my shoes a bit tighter so there is less foot movement and thus less friction.

A few more pictures from my Hunt Lake Trail hike 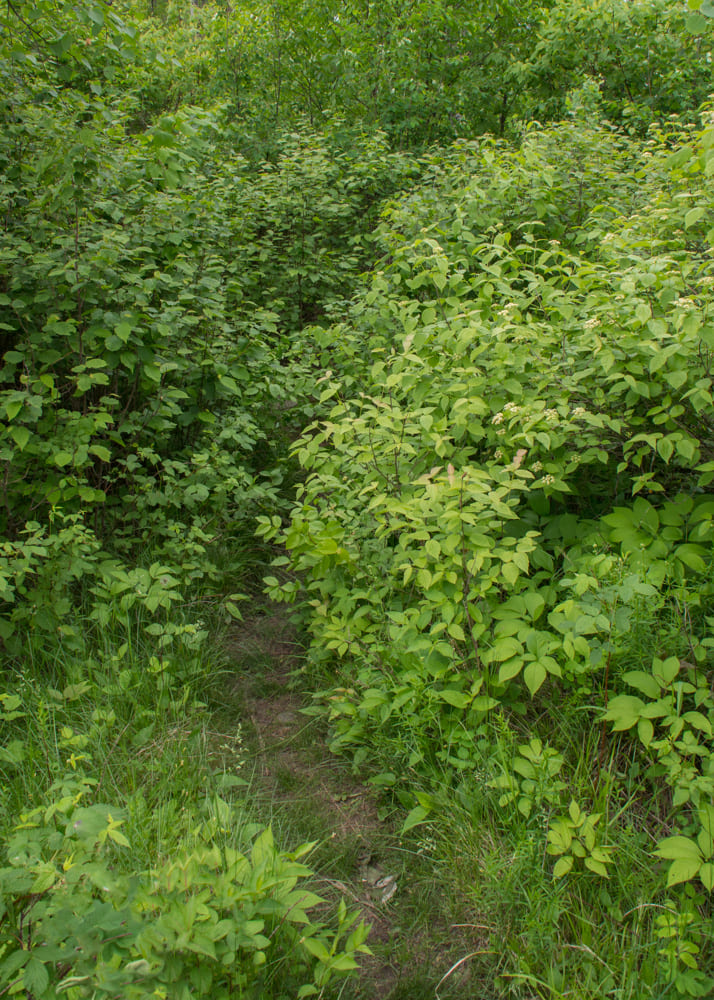 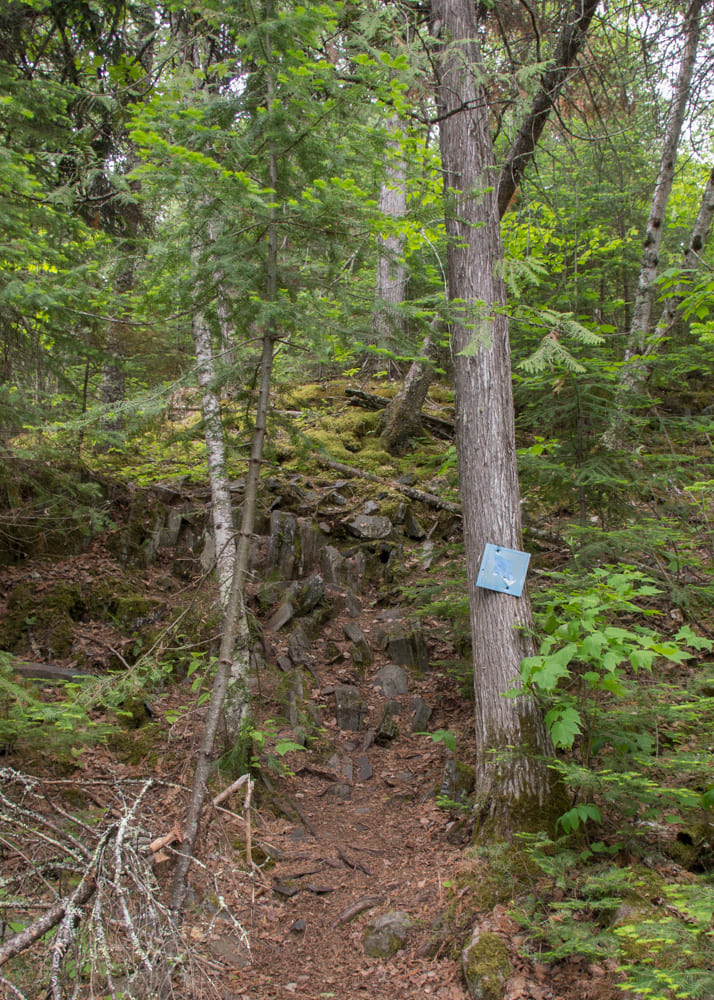 One of a number of climbs along the route 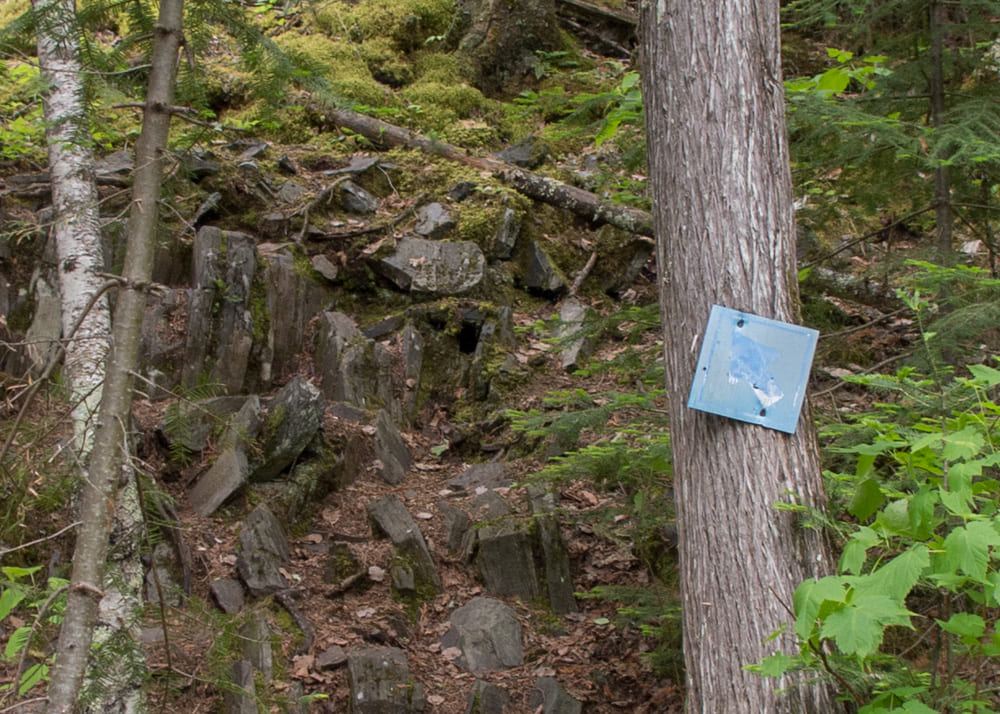 The climb zoomed in 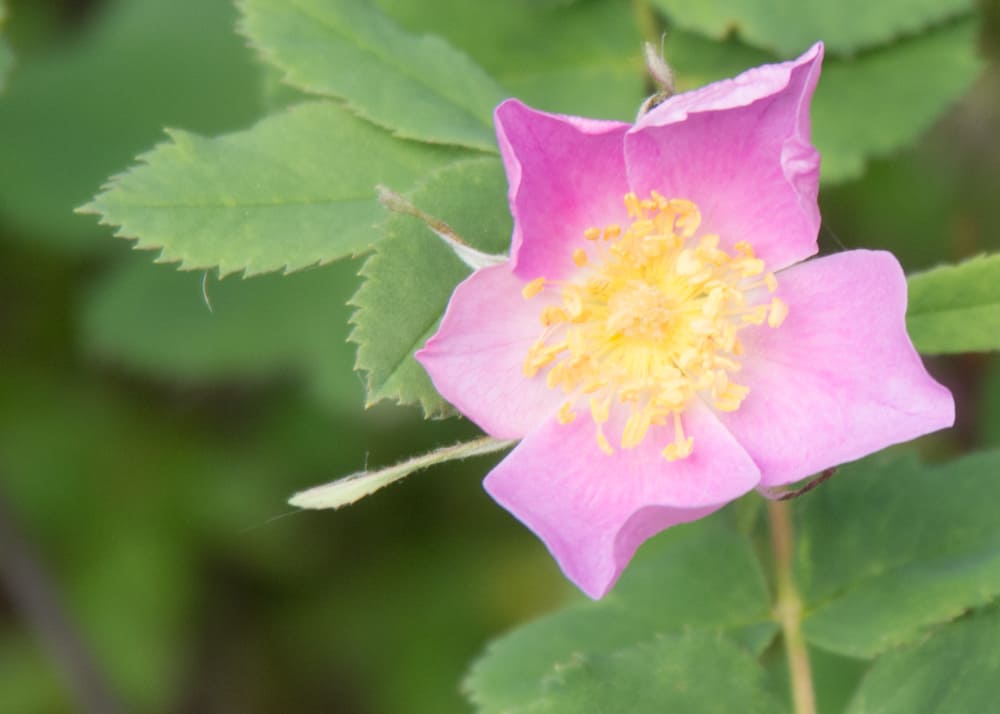 A pink flower for you flora lovers 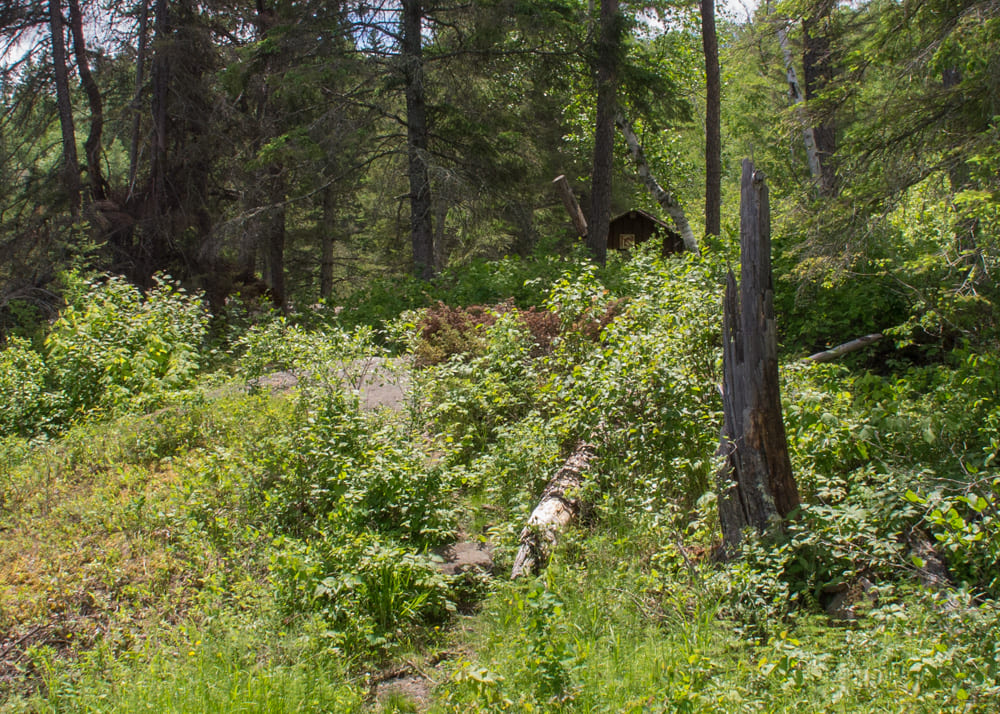 The halfway mark is in site…the shelter at Indian Bay 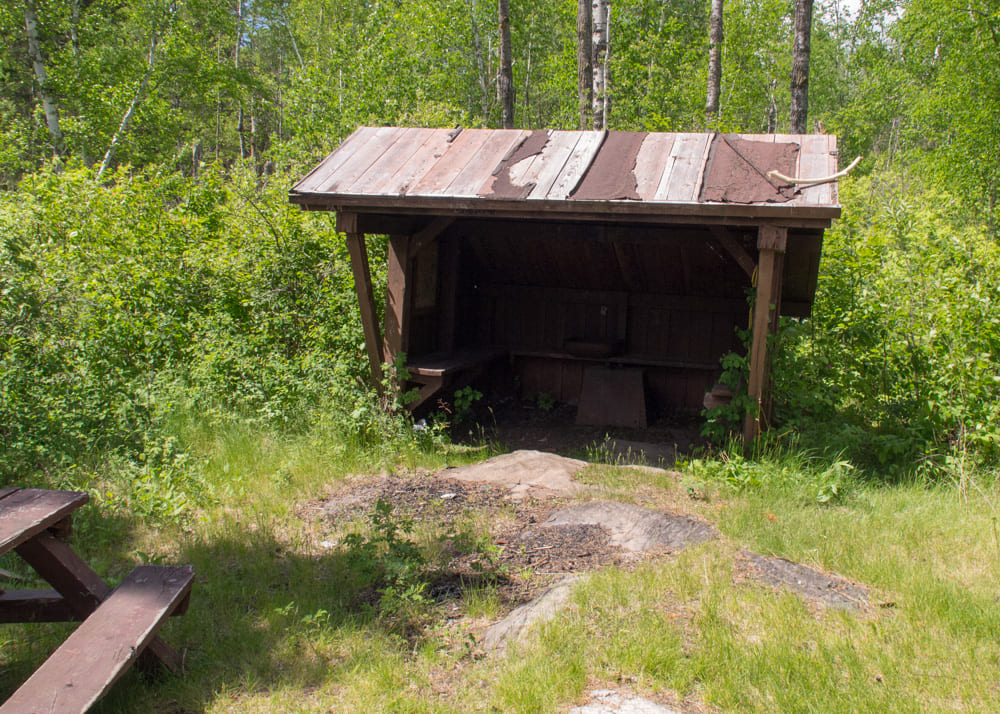 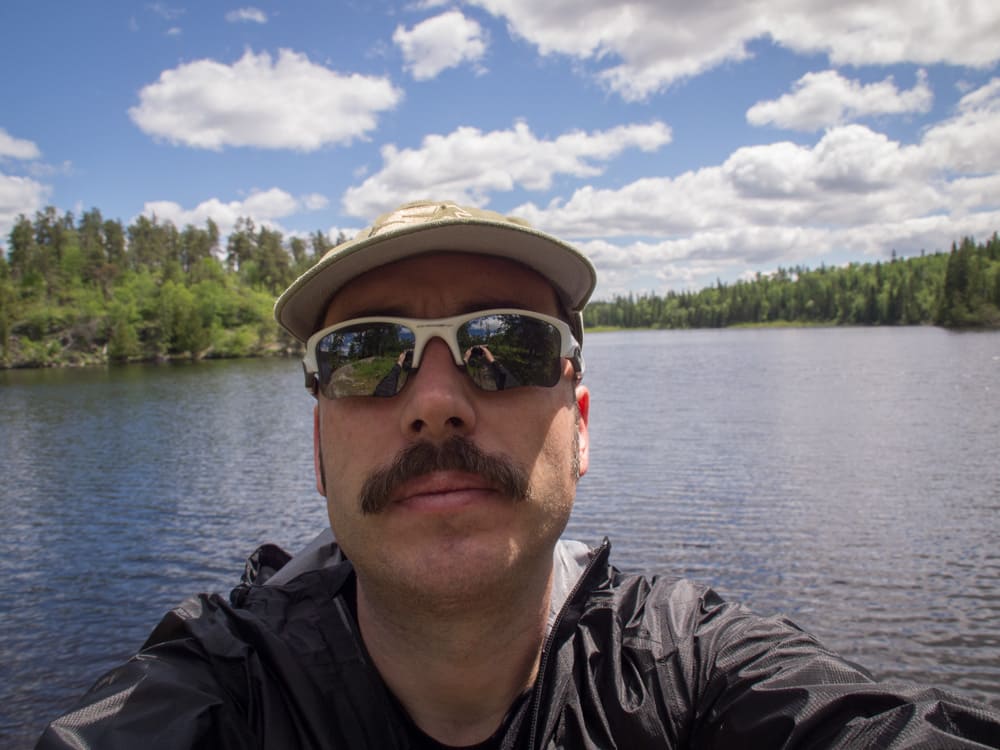 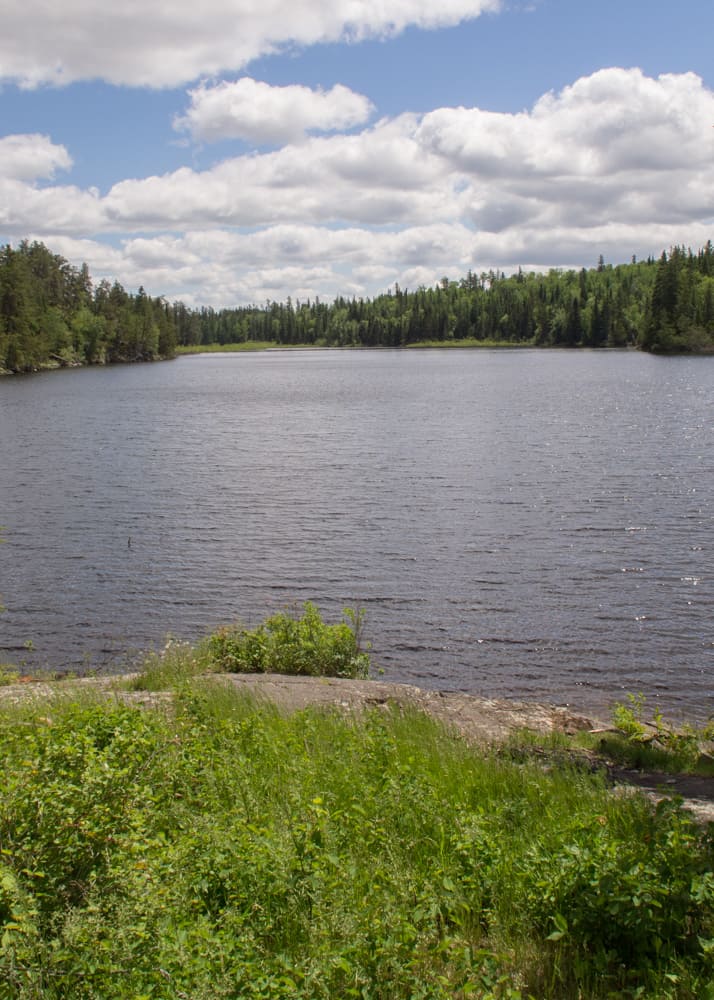 Indian Bay without me blocking the view. 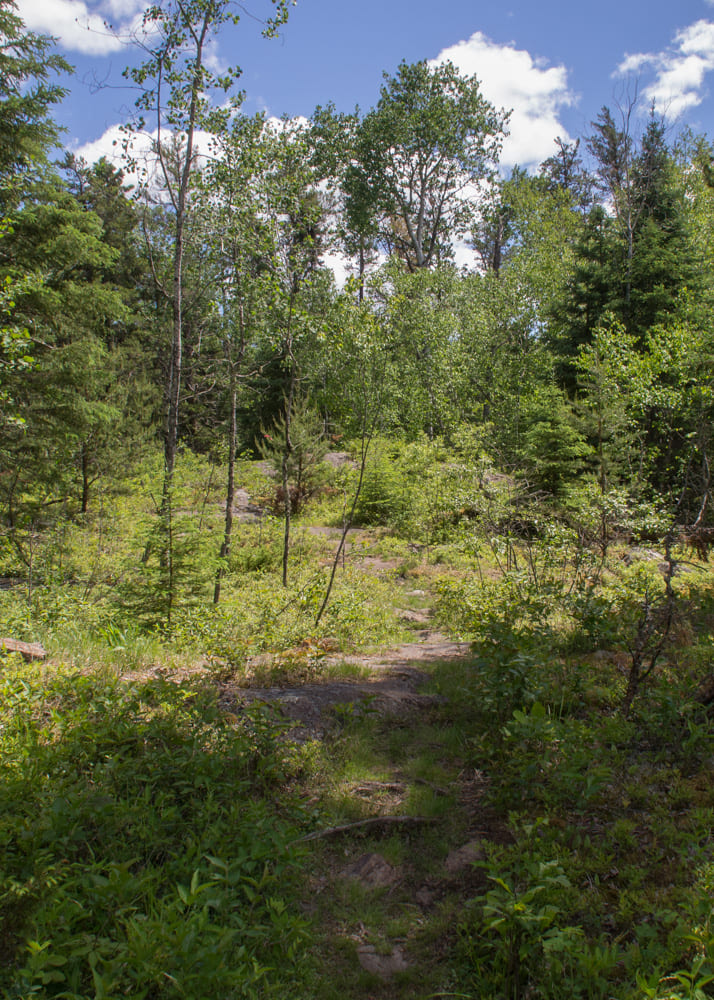 Returning to the trail head 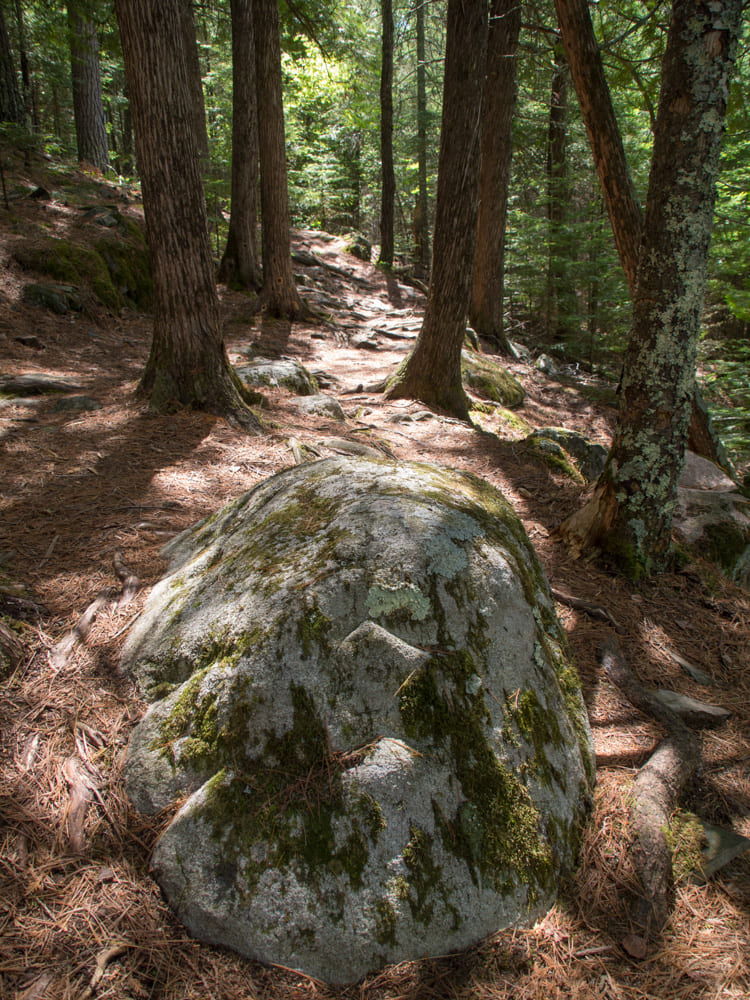 One of many rocks along the trail

Would I recommend the hike

Of course, it’s a great hike…mozzies aside. Just make sure you’re prepared for a solid 5-6 hours of hiking with some sketchy climbs and descents before you’re back at the trail head. Take enough water and snacks, or perhaps take some food in with you for a picnic at the Indian Bay shelter, as there is a fire pit next to the picnic table if you want to bbq.

A few more pics at the West Hawk Lake Campground 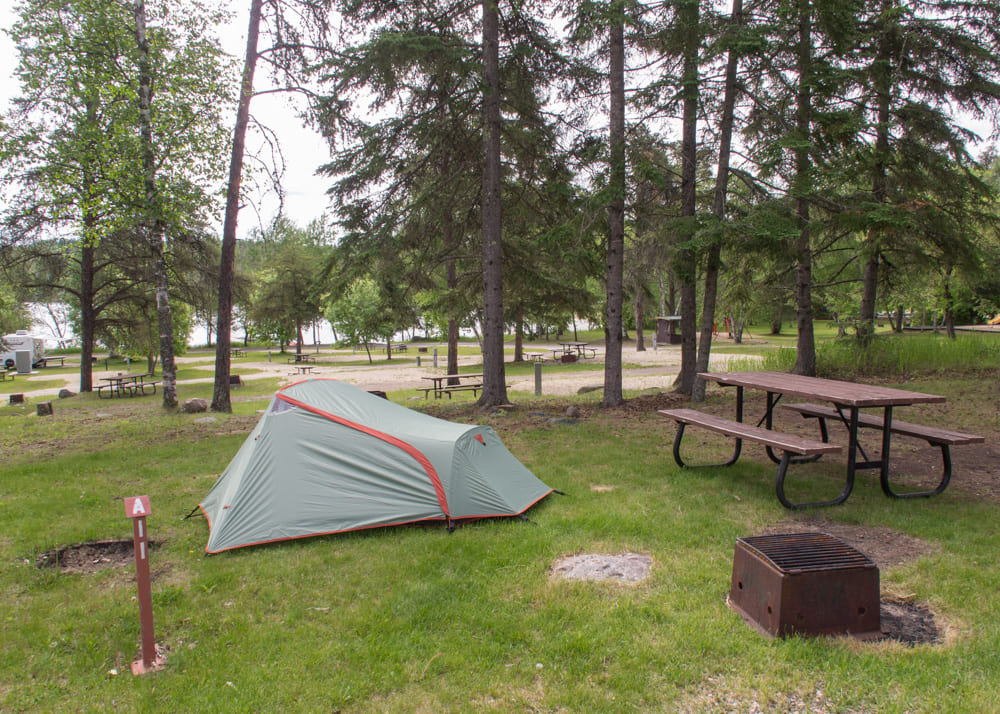 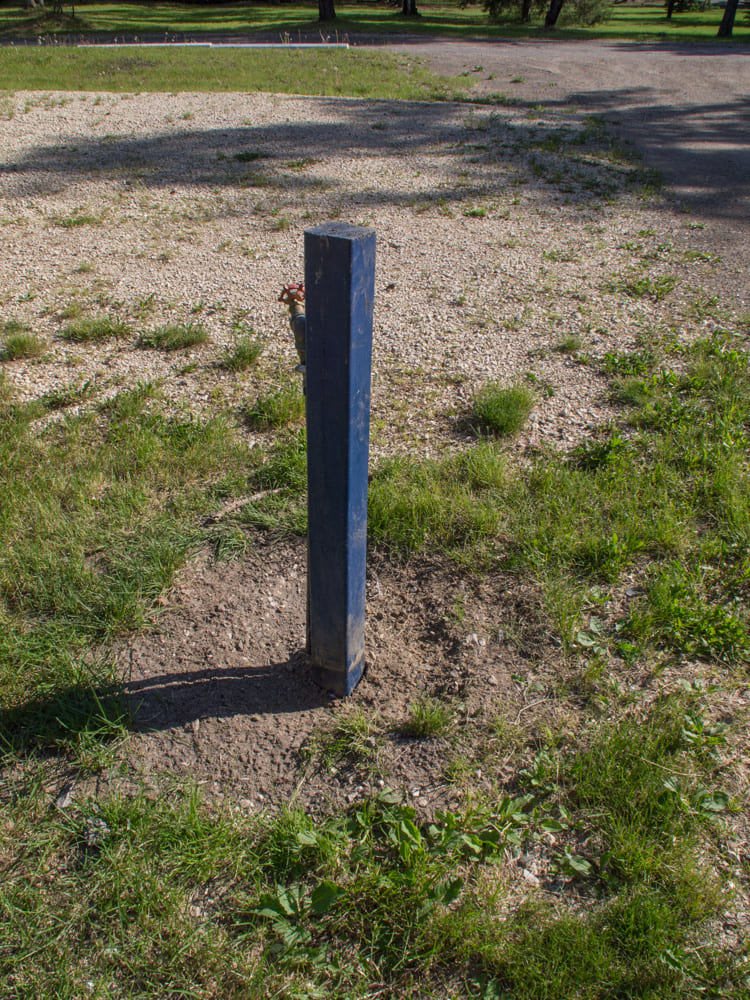 Arriving at two in the morning, it was dark, real dark. While trying to find a campsite that didn’t have electrical, I decided to back out of the road I had turned onto. When I met some resistance backing up, I thought it was just a bit of a hill so I gave it some gas. Buh dump a dump, that’s not a hill. Move forward, more buhdumping. Somethings dragging. Pitch black, can’t see, feeling under the car, it seems I’ve run over some styrofoam…no wait that’s part of my bumper. Try jamming it back in place, start driving, more dragging.

Ok time to get out the petzl headlamp and see what’s going on. Oh look, I’ve managed to rip both sides of my bumper off. What was left of the metal keeping the bumper in place that the salty streets of Manitoba winters had failed to eat away, the water pole I backed over finished off.

I actually had no idea what had actually happened until I awoke in the morning and saw that water pole laying on its side. Aha, so that’s what I backed over last night. It took about 5 minutes of digging to remove the gravel around the pole, stand the pole back upright, and then replace the gravel. 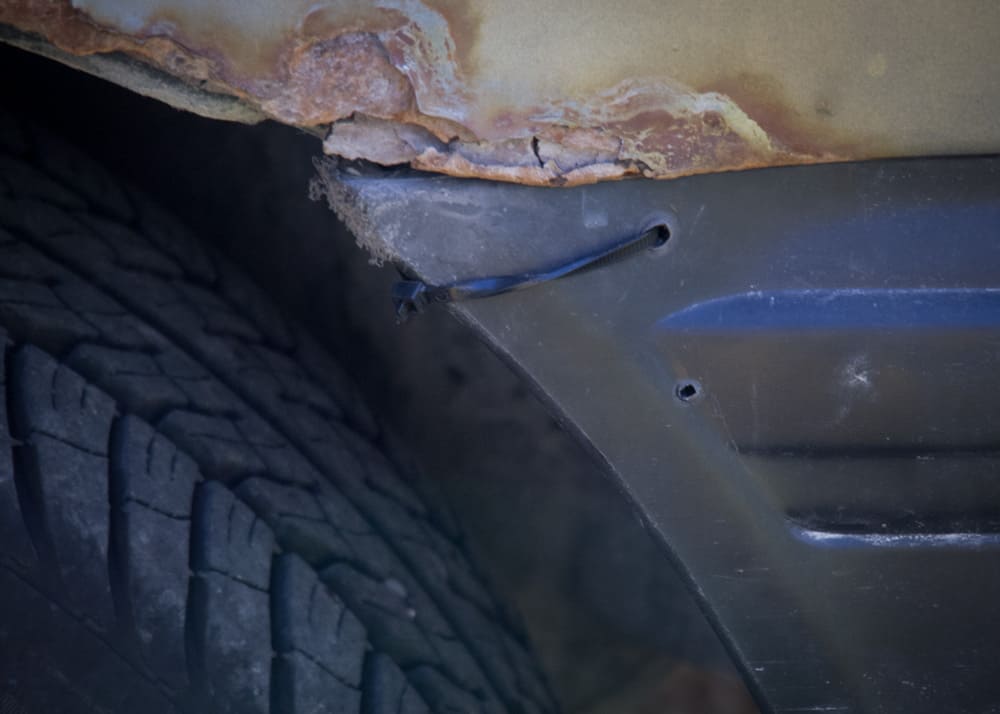 My solution for keeping the bumper in place. Used one on each side. 3 weeks later, they’re still holding strong. 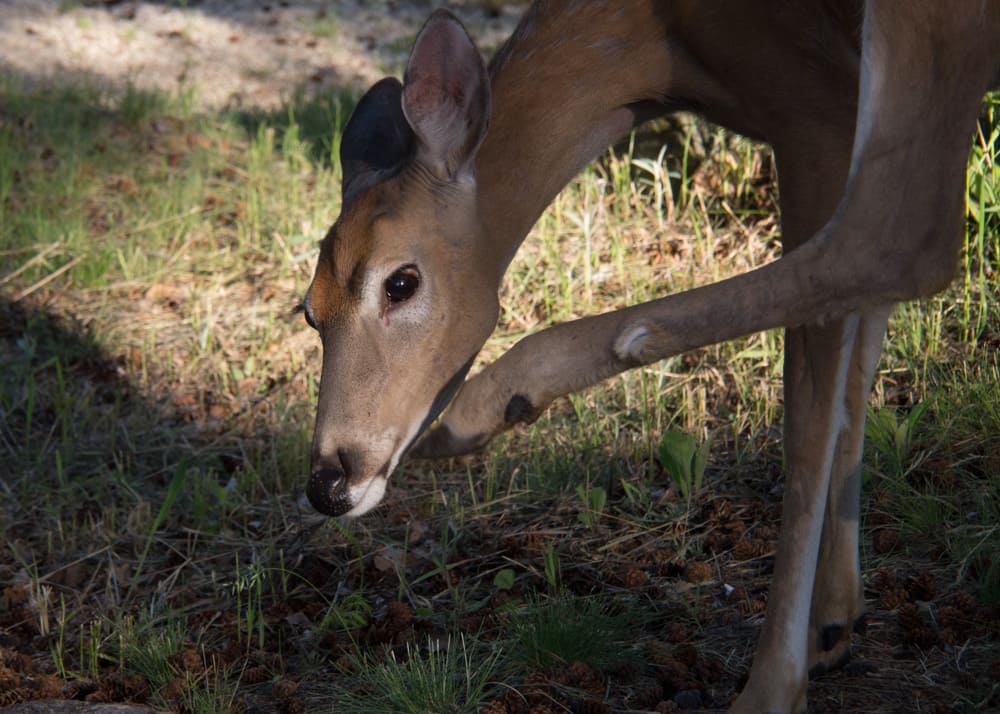 One of the deers that wanders around the campground 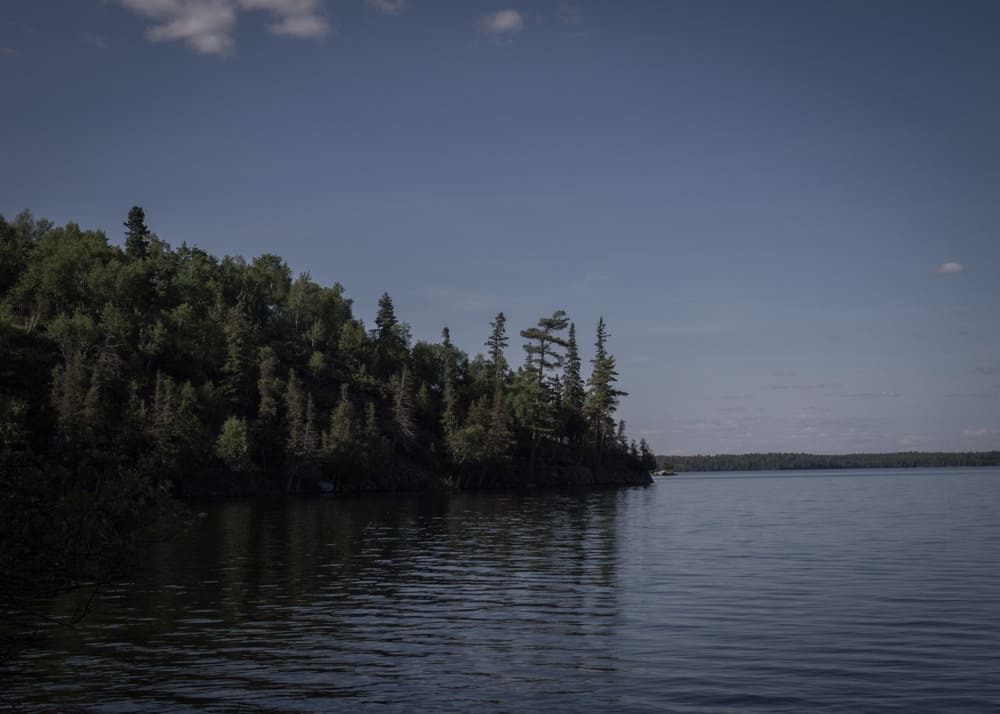 Looking out over West Hawk Lake after a long day

Leave a Reply to DaveCancel reply