In this case I think the picture says it all. 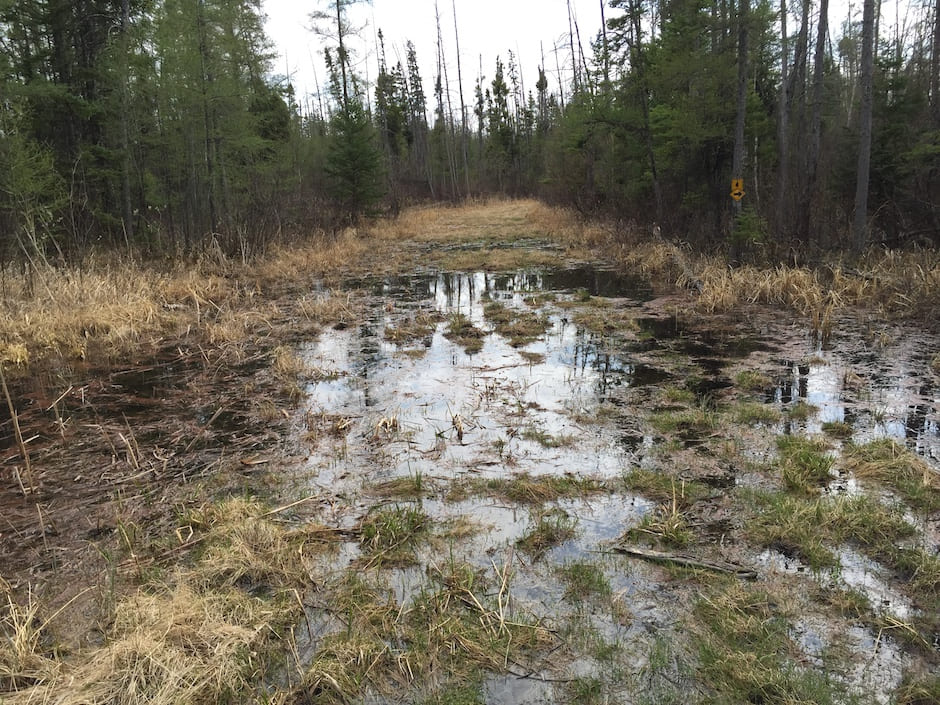 After wasting about half an hour to try and figure out where the trail actually starts. In this case, you need to walk about 200 yards across an open field and then wander along the edge of the brush until you find the sign for the trail. Today’s trail being Tamarac. With the other trails I’ve been on in the park, there was always a trail sign within sight of the map board showing trails nearby, this was obviously not the case with Tamarac.

The trail reminded me of the time I spent tree planting in Northern Alberta. The 10 – 12 hour days spent more often than not by myself walking up and back a section of bush planting tree after tree. Step step step, shovel in, forward a bit, back a bit, seedling over the hole, sweeping motion to put it upright, no jplug, kick with the heel to remove air pocket, step step step…

And then I came upon it. About 4 miles into the hike, the bog appeared. I studied the 50 or so meters ahead that I could see for a few minutes. Checked the right and left sides for the best route around before settling on the right side (which worked for me last week on another trail that became impassible due to bogginess). To be honest, it didn’t look very promising from the beginning, simply because I didn’t see a lot of dry ground through the brush, only bumpy tall grass and a few trees. As it turned out, and as I suspected, it was nothing but bogginess in the brush as well. I did my best to avoid the water, stepping from fallen tree, to stump, to fallen tree, to *crack*. There goes one shoe, step, stretch step, no more options, other shoe wet.

So I just headed back to trail in defeat, but happy to going at a faster pace. As it turns out, my effort to skirt the trail ahead would have been fruitless, as that 50 meters turned into about a mile of numerous bodies of water covering the trail. Many booters were had, some as deep as my knee, some icy cold, and all very wet.

Perhaps if I had known that there was a mile of bog halfway through the trail I wouldn’t have taken that trail, waiting instead for it to dry up before heading down Tamarac. Perhaps taking Birch or Chickadee, two trails I am well familiar with, and which have only been wet when it’s been raining outside. But had I have done that, I also would have missed out on the fond memories of Northern Alberta, memories that eclipsed the downside of booter alley!

The bananas were pretty tasty 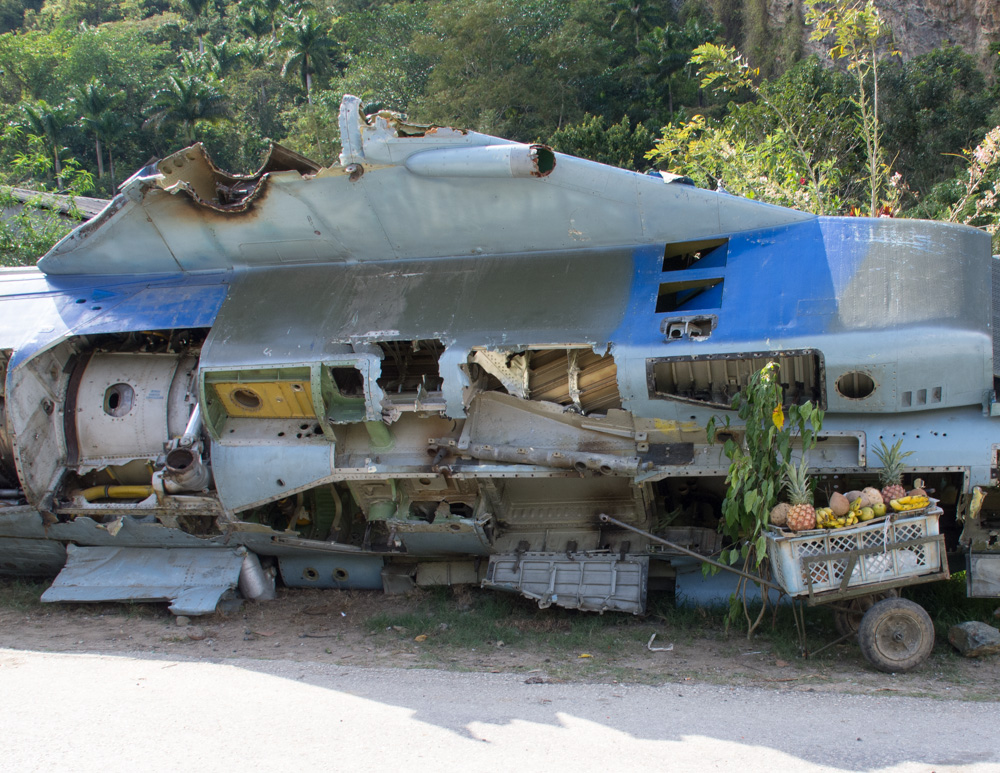 We were just cruising along the road on the way to Trinidad Cuba, when we drove past this dilapidated fighter jet with a man sitting in the shade of it selling fruit. It didn’t take long for us to come to a stop, do a quick “should we back up” check, followed by the sound of the rental car going in reverse. The man selling fruit had a briefcase with him, and would read in the shade of the fighter jet while waiting for passing vehicles to stop and grab some fruit. We picked up some bananas, which were tasty, and he gave us some coconut for free, also tasty. A few pics later, and we were back on our way to Trinidad.

A Moon jellyfish floating in the darkness of the deep blue of the Red Sea in Dahab, Egypt. As much as I would like to claim I took this picture, this was taken by my dive buddy during the few days I was in Dahab for some open water diving.

My dive buddy had a top notch Canon underwater camera setup, thus the quality picture, and was also a Padi certified scuba diving instructor. Since he was a certified instructor, we were given plenty of freedom by the Egyptian dive guides to stop and go as we pleased. This of course meant we would often be playing catch up to the rest of the scuba group, but it also meant we got more time to observe the fascinating marine species we came across in the Red Sea. The various types of clown fish and nudibranchs were among my favorites to stop and observe. Good times. 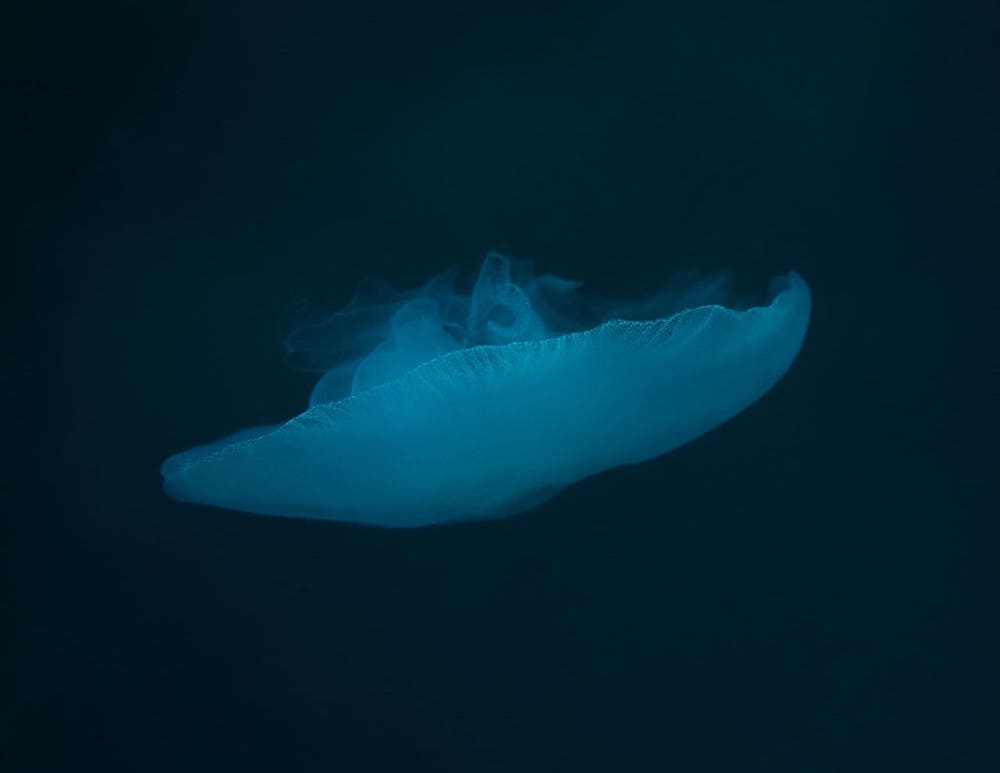