While taking the bus to the weekend flea market in Mazatlan, I kept an eye on the landmarks we were passing so I could walk back to the hotel after I was done shopping for cheap tshirts.

On the walk back, I came across this little guy playing in some dirt on the sidewalk outside of a corner store. It reminded me of how a little imagination can go a long way. 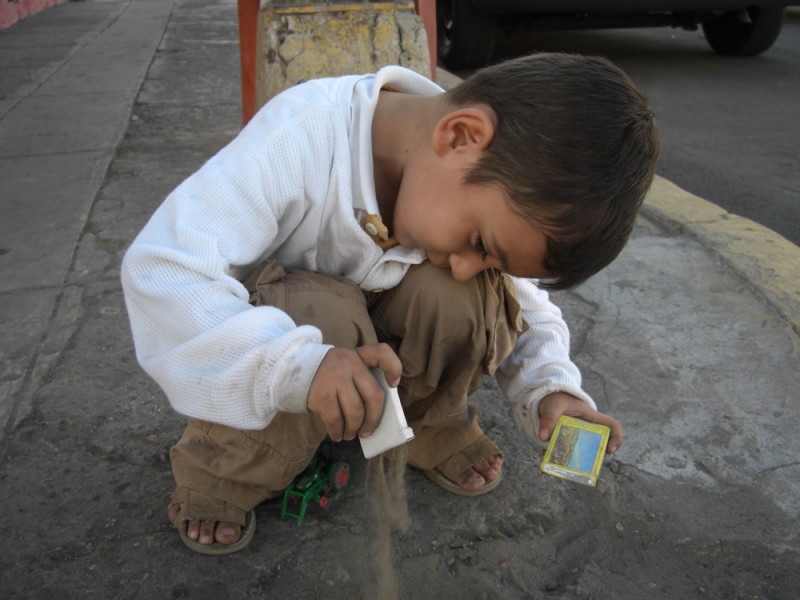 A Wall in Mazatlan Mexico

After leaving the hotel, I broke left and came upon this colorful wall in Mazatlan.

The wall in question.

Background: I have a late 2011 15″ Macbook Pro. I saw graphic anomalies over the last few years, but didn’t think much of it. Saw a few articles on the problems associated with the late 2011 Macbooks, but didn’t think much of it until I saw that Apple was owning up to the issue and offering warranty work for free even if your Macbook Pro was out of warranty. So a few months ago, I brought the computer in, and they replaced the Logic Board free of charge, but noted an error associated with my third party ram.

As soon as I took it home, I immediately noted that the graphics fan was spinning up for no good reason. And after a few months the graphic anomalies started reappearing. So a couple days ago I brought the Laptop in again to the Apple Store to have it checked out. I was assuming the Logic Board would be the issue again (and still do eventually), but the only issue that they could find was that the “third party ram failed”.

Further Testing and Conclusion: That didn’t make sense to me, so when I brought the Notebook home, I proceeded to perform tests by clicking the option d keys at startup. I first did the quick tests with just one stick of ram at a time as I wanted to figure out which ram was “corrupted”. The simple tests brought back no errors. So I performed the extended tests on each stick of ram, which takes about an hour, and again both sticks of ram came back without errors. So I tried Apple Hardware Test with both sticks of ram, a total of 16GB, and within a few minutes it came back with the Mac error code 4MEM/9/40000000: 0x82d09d18. At this point I remembered reading the other day when I was checking on my Macbook Order from back in 2011 before bringing back to the Apple Store for testing, that the Macbook Pro Model Number FC721LL/A lists the Maximum Ram allowed as being 8GB. Conclusion then for this error, is that the error is solely the result of having more ram installed than what the Laptop is listed as allowing. I have since removed one of the 8GB sticks of Ram and have yet to see any graphic anomalies or had the graphic fan spin up for no reason. I’d be amazed if removing a stick of ram is going to solve the graphic anomalies that looked exactly that same as the ones that required my MacBook Logic Board replacement, but I’d be more than happy if it did.

Additional Update December 8th/2015: It’s been 2 months since I removed the extra ram for my Macbook Pro, and so far there have been no additional visual abnormalities or odd graphics showing up on the screen. All is good.

Another Update September 26th/2017: It’s been almost 2 years since I removed the extra stick of ram from my Macbook Pro, and no additional visual abnormalities or odd graphics have returned, glad I was wrong thinking they would return.
[Sidenote] A few months ago I was having some problems with my Macbook, a lot of spinning color wheel, graphics card spinning up, and screen freezing…turns out it was Firefox that was causing the problems after they updated the underlying code of their browser, since then I’ve switched to Chrome and Safari and those problems have stopped.

Do you have an experience with this or a similar Mac hardware error, let me know how you solved the error.